ALZHEIMER'S AND DEMENTIA - A POSSIBLE CAUSE?

FROM TOES TO HEAD
IS THIS
DEMENTIA
AND
ALZHEIMER’S DISEASE?
ASKS ROY VINCENT

Amongst the many items of trash and dross that would invade my television set if I let them, there is, fortunately, a strand of programmes that make worthwhile the presence of the TV in my home.

From among the catalogue of choice programmes that I could list, there are some that I always find illuminating as well as enjoyable.

The various young singer/musician/dancer competitions invariably produce remarkable talent in performance.  But for me, and often more revealing than the performances themselves, the preceding master classes and practice sessions can provide compulsive viewing.
Recently I watched a EuroVision Young Dancer competition, and again found the earlier practice sessions to be illuminating.  Not necessarily, as one might expect, to view the dancing itself, but rather to appreciate the different attitudes of the young dancers.

Dedication and application there were a-plenty, but one competitor from a Central European country stood out.  She was seventeen, and featured more than the others.  During one of her breaks from dancing, she was interviewed while she tended her feet.  She described how she often had to work through a ‘pain barrier’ – which she did out of dedication to her teachers.  She pointed to a painful lump on an instep, and described how the nail of one of her big toes had been pushed down at its root, again causing her severe pain, which, nevertheless, she overrode in her zeal for the dance.

In my mind as I watched, I was taken back to thoughts that had appeared when I first became aware of the existence of Alzheimer’s disease.

The connection may appear non-existent at this stage, but this is how it arose:

Several years ago, I watched on television a film called Do You Remember Love?  It was a very poignant story as it revealed the gradual progress towards dementia of a vibrant and vital woman university lecturer.  No more than fifty years old, her phases of awareness and gradually diminishing mental faculty were well demonstrated, and as I watched, I began to understand the implications of something that hitherto had been only a name.

At that time, I had had no personal contact with the illness, and indeed could name but two individuals who had suffered and died from it.  One was well know to most, namely film actress Rita Heyworth, and the other was Mrs. W. someone who was well known in the village where I once lived.

At first sight, there may appear to be yet another non-existent connection, but there is one – both had been dedicated dancers.

Biographies of Rita Heyworth describe her passionate zeal for dancing from an early age.  Mrs W. had formerly been a ballet dancer, equally passionate for her dancing, who had then continued as a teacher of ballet until her diminishing faculties brought to an end her lifetime of dancing.

Puzzling though it may appear, I aim to demonstrate a connection between a debilitating and sometimes fatal condition of the mind with possible causes originating at the other end of the body.

My deductions will acquire more weight when one considers the fact that many footballers develop and, in some cases, die from Alzheimer’s disease, and footballers, more than most individuals, seem to be prone to foot injury.

The connection that forms the basis of my reasoning is Acupuncture - the system of meridians and individual points that pervades the whole of the body and head.

Some dismiss acupuncture as a non-existent phenomenon; others concede to it a minor palliative role.  To those who do not accept the reality, I simply ask that you should keep your mind open and follow my arguments as they develop.

There are many books dedicated to the whole system of acupuncture therapy, and there are others that demonstrate the actual existence of the bodily system by indirect means.  One of the latter is The Body Electric by Robert O. Becker.  An American orthopaedic surgeon, Becker describes his research into the subtle electrical currents that facilitate the regrowth of bone in the healing of fractures.  Quite by chance, he identified the independent electrical ‘circuitry’ that coincided with the traditional acupuncture ‘meridians’.

The meridians are separate branches of the circuitry that together link all parts of the body.  There are twelve traditional meridians - six terminating on the hands, and six on the feet.  As my discussion at this stage relates only to the feet, I shall concentrate on those meridians that begin or end there.
Each ‘circuit’ has a name associated with that of a particular organ.  It does not, however, indicate that the named organ is the only body part to be treated.
This is the list of the ‘foot’ meridians -
1. Spleen.  2. Liver.  3. Stomach.  4. Gall.  5. Bladder.
6. Kidney.
The feet are illustrated at the end of this article.  There is no picture of the plantar surface of the foot, which has only one acupuncture point.  This point is ‘Kidney 1’, and is situated “on the sole of the foot between two pads: one under the base of the big toe (metatarso-phalangeal articulation) and the other at the base of the metatarso-phalangeal articulations of the other four toes” [Extract from Acupuncture Therapy by Mary Austin].
Each acupuncture point has its own repertoire of ailments that one may treat from that point, a repertoire that has been refined over the many hundreds of years that acupuncture has been used, and is now the standard taught in most Acupuncture Schools.

As I noted above, the ailments might relate to parts of the body that are remote from the actual point of treatment.  For example, Bladder (Bl) 67, which is located on the smallest toe, may be used to treat such diverse conditions as ‘pain in eye’, ‘difficulty in urination’.

However, I want to make very clear - very clear - the fact that I am not suggesting that, willy-nilly, this specific point, and those that I list below, should be used in isolation to treat specific ailments.  The whole practice of acupuncture is a total therapy, and not one to be applied by untrained individuals.

In the of Traditional Chinese Acupuncture, for example, practitioners undergo an extensive period of full-time training that includes study time spent in .  Furthermore, their treatment involves a detailed study of the individual patient and how he or she responds to a whole variety of tests.
What I am trying to do in this essay is to use one specific piece of ‘received wisdom’ from the field of acupuncture, and to apply it, again specifically, in relation to dementia.

The ‘received wisdom’ is this: if an acupuncture point is damaged, it is possible that the ailments that are treated from that point may actually be created within the person.  The damage may be that resulting from fractures, severe bruising, local sprain, operation scars, trauma following other injury, and, in the case of feet, such accretions as bunions and corns.

In the example of the dancers mentioned, some of the damage may be that caused by the compression of the delicate joints of the toe bones and the tarsals as the dancer works on ‘points’.

One does not have to look further than one’s own feet to realise the potential for damage – indeed, it will probably be the case that the damage is already there!  Each time I look at mine, I see such an area of neglect that I have at my extremity.  If one only knew in youth, what one learns in age, what a different attitude one would have adopted to one’s foot care and the choice of footwear.

Studying mine, as I sometimes do in the interests of science, I see the depredations of ageing – I am now ninety – and I see something that has always been there for as long as I can remember.   What I observe are the differences between my two feet, difference in size: difference in conformation.  Shoe-shop assistants invariably said “Let’s try the right foot first, it is usually bigger”.  This statement was sometimes followed by a remark about ‘kicking footballs’.

Reflecting on the topic many years later, I recall that I did not spend very much time kicking footballs, so there must be other reasons.

For an explanation, it is necessary, first, to acknowledge that we are mammals, and also that it is not very long in the overall evolutionary span, that we were quadrupeds.  Quadrupeds have a particular linkage between the four limbs in that they are linked in pairs diagonally.  Thus, in humans, the right arm and left leg are linked, and likewise the left arm and right leg.  Similarly, the right hand and left foot are closely linked, and each responds to the actions of the other.  Thus, if the right hand grips something, the left foot adopts a similar ‘gripping’ mode.  (I distinctly remember my G.P. referring to my left foot as “clawed”).

I am right-handed, and it does not require long reflection to consider the amount of time that my right hand has been engaged in gripping objects since my birth.  One has only to consider how frequently and for how long one gripped a pen or pencil as one progressed through the various stages of learning, to be able to begin to fill in the complete picture.  In making comments such as these, it is as well to remember that I am only analysing myself.  Each person is an individual, and any damage or distortion of the feet would be the consequence of personal history, and not of any rule of thumb analysis.


Points on the Liver (Liv)

Points on the Spleen (Sp)

Points on the Stomach (S)

Fainting with cold limbs, prone to fear, madness, epilepsy, alarm in children, paralysis, pain in head and nape of neck, eyes dizzy, vertigo, hypertensive ecephalopathy. (The position of K1 is on the plantar surface of the foot, almost below and two centimetres proximal to Liv. 2).

Headache, ‘shaking of head with open mouth in children’, convulsions in children.

Point A is not a classical point but has been added by research that is more recent.

One could use it to treat –
“articular degeneration of the atlas/axis joint.” 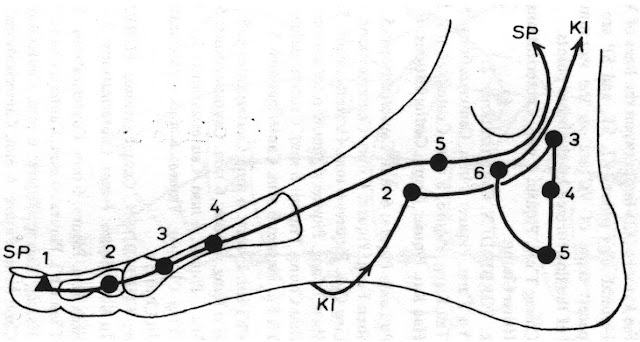 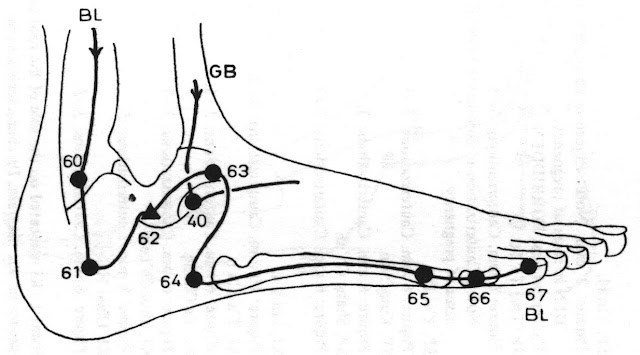 BOOK - LISTENING TO THE SILENCES
IN A WORLD OF HEARING VOICES