Samuel Johnson,
writing in 1781,
sets the scene for us…

“The woman had a bottom of good sense.”

The word bottom thus introduced, was so ludicrous that most of us could not forbear tittering.

“Where’s the merriment?  I say the woman was fundamentally sensible.”

And thus, it seems, it has always been.  And judging by the reaction of many, from the smallest child to the ubiquitous television studio audience, it will always be so.  Just mention bottoms, bums, ‘poos’ – and almost everyone falls about in sniggers, titters and giggles.

However, go one step further, and ask someone “How do you wipe your bottom?”, and embarrassment replaces the humour.  Yet much can be learned from this simple act, and it can demonstrate something that is most fundamental (pace Dr. Johnson) in the shape and function of the human body.

Bottom wipers divide into two camps – those who ‘reach through’, i.e. between the thighs, and those who ‘reach around’.  There are yet two further sub-divisions established by the further question “Which hand do you use?”  And here we really get to the very basis and core of certain human values, behaviour and social interaction.

“It is important to consider one aspect of handedness about which writers have been guarded and polite, referring in general terms to ‘hygiene’ and ‘uncleanness’.  The epithet ‘cack-handed’ is often used but its meaning is rarely understood.  The time has come for us to realise that one hygienic action is done with the left hand by nine-tenths or more of the World population, because they are right-handed.

In civilised countries today this distinction no longer matters: but through the centuries it has mattered very much, and it is in many ways responsible, not only for the taboo and physical prejudice against the left-hander, whose allegedly ‘unclean’ hand is his preferred hand, but in reinforcing the social prejudice against the physical minority.”

Michael Barsley opened the first chapter of The Left-handed Book in this way, and in confronting the issue that I have raised, has given me my statistic – namely 90% or more of the World population is right handed.  But why?

And another ‘why?’  Since most individuals are right-handed, why do they not use for this function the hand with which they have the greatest facility– namely the right hand?

+++
As you read, you may wonder just what on earth has all this to do with mental health, and particularly “Hearing Voices” and similar conditions.

Only this – anything that undermines the natural functioning of the human body can have direct implication upon the function of the human mind.  Furthermore, mal-functions of the body and mind are easily exploited by the intruding entities that in most instances are the origins of ‘voices in the mind’,

Yes.  Intruding Entities.  All of my writing is dedicated to spreading this knowledge.  All of the considerable feedback that I receive from individuals World Wide is 100% in agreement with what I write.  So please read on, and then read my book, and see whether you will agree.
+++

Yes.  Why don’t most individuals use the right hand?

I first became aware of a particular aspect of human ‘construction’ when I began to train young horses.  After ‘mouthing’ and ‘bitting’ – the process of preparing a horse for having a bit in its mouth – and being led and handled, the next phase involves working it on a ‘lunge’ rein.  The trainer stands still while the horse moves around a circle at the extent of the rein, which itself is fastened to a point on the front of the horse’s nose.  Initially led on the circle, the horse begins to follow commands, and is then worked on its own.  What soon becomes apparent is that it moves happily circling in one direction, but is completely unhappy in the opposite one, and breaks away from the track.

This illustration shows why.  All horses have a longitudinal curve in their bodies.  One of the principal objectives of continued work on the lunge is to try to develop sufficient flexion in the horse’s spine to a degree that it will circle in both directions willingly.  The curvature is never completely eradicated, and its presence can be noticed when watching horse racing on television.  When viewing shots seen from directly ahead, it can be observed that the hind legs do not follow completely behind the front ones, but are tracking to one side. To run in a straight line is unnatural for a horse in the wild – they circle naturally and all on the same curve and in the same direction.  This is particularly so with foals, as they soon begin to canter around after birth, but always in a manner that brings them back to their mother naturally by virtue of the body curve.

Where are farmed, the ‘gathering’ area and pens are all constructed so that the animals proceed always on a right-hand curve.  If accidentally turned to the left, they scatter.  Likewise, in sheep-dog trials - if the handler can manage to bring the sheep on a gentle right-hand curve, they proceed without trouble.  If the curve should become left-handed, the sheep become unmanageable.

As I wrote earlier, my observations apply to all mammals that can be observed regularly.  Look carefully at a dog as it comes toward you along a straight path.  Inevitably, you will see that the hind legs do not follow immediately behind the front ones.  Instead, the hind-quarters are carried to one side, as was the case with the horses.

I have friends who are dairy farmers.  Their cows by regulation have to have an identifying number tattooed on the body.  The location for the number is high on the right quarter above the hip bone.  One of my friends finds this placement of the number to be a source of continual annoyance, for when she has to locate a particular cow in the herd, inevitably it is lying on its right side with the number obscured.  The cow lies that way because it is curved longitudinally, and, inside it, a foetal calf, lying with its head to its mother’s rear, inevitably develops the identical curve.

And humans also.  Where individuals sleep without the constraints of a modern bed and a sleeping partner, it will be found that the preferred mode of lying is in what is described as ‘the recovery position’.  This, for a right-hander, is semi-prone, on the right side with the left knee drawn up.  The body lies in a natural curve, as does a foetus inside its mother.  But, somewhere along the line of human development, some mothers must have slept on their left sides, and produced offspring with a different lateral curve.

Examine yourself and others for physical features that may be observed easily.  Likewise, examine the photographs of the models below.  The seated female has taken great care (front view) to place her feet and hands symmetrically, assuming that the body will likewise show symmetry.  But it doesn’t.  Left shoulder and left breast are higher than the right.  The centre line of the body shows a long curve from fork to the base of the throat, and so on.

From the rear, the spine has developed through a series of short disjointed arcs, but all showing the trend of a long curve.  The asymmetry of the shoulders is very obvious.  Many individuals will say, “My left (right) shoulder is higher because I carried my school bag there.”  The converse is true – the bag was carried on the higher shoulder because the shoulder strap was less likely to slip off when walking.

Ever since I became aware of these phenomena, I have observed people, especially if I see someone carrying a shoulder bag on the right shoulder, and try then to see whether an individual is left handed.  Try it yourself – you will be surprised that you will be correct virtually every time.

Additionally, examine the other male and female poses and study particularly the locations of the spinal ‘discontinuities’. 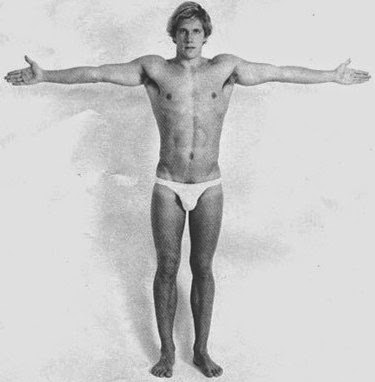 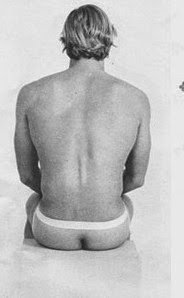 Some might argue that these are ‘occupational’ irregularities, acquired as the result of a regular posture when at work or through long hours of sitting when at school.  However, I have yet to hear any rational argument, or see any evidence that justifies that assertion.

There is much to observe, and much to study, although, from here onward, the observation and study must be in your hands.  I have drawn attention to the curves and irregularities that you will find occurring naturally in the spines of most individuals.  It is now up to you to relate them to the potential organic, physical and mental ailments that may result.

The discontinuity between the sacrum and lumbar spines – possibility of genital/urinary/fertility problems?

At the base of the neck and at the top, at the atlas/axis joint – might there be interference with blood flow – say between left and right sides of the brain?

I do not regard myself as sufficiently competent to make this analysis, except on my own behalf, and this is why I say that from here the analysis is up to you.  However, returning to my earlier statement concerning ‘intruding entities’ – the subject of much of my writing in the whole field of ‘hearing voices.  Anything that interferes with the harmonious function of ones body may also affect one’s mind and mental function – and might, ultimately, be the source of pain of possibly unknown origin.

As I describe in my book and general writing, ‘intruding entities’ can and do exploit these situations – possibly even claiming that ‘they’ are causing the pain – adding to the distress of an already distressed individual.

The book is titled “Listening to the Silences, in a world of hearing voices”, and is free to download at www.royvincent.org

Various relevant articles and essays are placed on